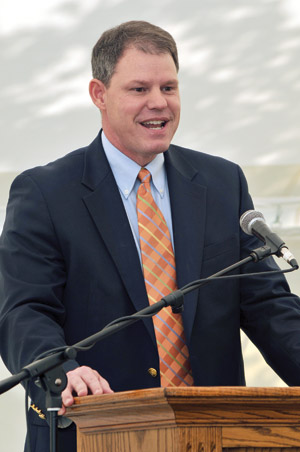 This piece is adapted from a speech that Neil Ramsey delivered during Owen’s Alumni Weekend in April.

Looking back at my graduation 25 years ago from Owen, I’m amazed at how much my perspective has changed. Perhaps I could have learned most of what I’m going to describe here by reading, but there’s no way that knowledge would mean anything to me today without the experiences to back it up.

So what have I learned since graduating from Owen?

I’ve learned that most of the lessons my parents taught me were the keys to a happy life. When my dad used to tell me that I would grow up to be exactly the kind of person that I was as a boy, he was right. Ralph Waldo Emerson said, “The only person you are destined to be is the person you decide to be.”

I’ve learned that how I handle my problems is a lot more important than avoiding the inevitable problems that pop up. Unfortunately I haven’t fully learned what Teddy Roosevelt said best: “Nine-tenths of wisdom is being wise in time.”

I’ve learned that it is okay to say what you think, but it is better to do it tactfully. I did not understand this when I was younger. I felt that if what I was saying was true and I meant no harm, it was okay to say it. It took many hurt feelings to learn this one, and I’m still working to be more considerate in my delivery.

I’ve also learned, as a friend of mine said 20 years ago, that “there are no throw-away comments.” The irony of this quote is that when I recently reminded him of the comment a couple of weeks ago, he was surprised I had remembered it. Everything you say and do can touch people in a positive or negative way, and you may never even know it.

I’ve learned to go as far as I can to show people I love what they mean to me. If you find yourself wanting to record your feelings in words, do it.

I’ve learned that substance may be all that matters, but you may not be listen-ed to if you do not pay attention to form. Substance without form serves little purpose.

I’ve learned that having ambitions is much more important than being ambitious. I’m one-tenth as ambitious today as I was 10 years ago, but my ambitions are 10 times greater.

I’ve learned that perseverance is the key to success. Accumulated knowledge and experiences are our most valuable assets.

I’ve learned that you can change the way the world treats you simply by opening your heart, looking for good, and showing more kindness and patience. I haven’t mastered this, but I am better than I used to be, and the world treats me better because of it.

I’ve learned that I would rather be respected than liked. I would prefer both, but given the choice, I’d pick respect.

I’ve learned that the need for my parents’ approval never goes away.

I’ve learned that I could not be successful in my own business until I decided I was just another employee with specific responsibilities.

I’ve learned that my favorite people are very smart, have a good sense of humor, and don’t take themselves too seriously.

I’ve learned to demand much less of most people but demand much more from the people who can handle it.

I’ve learned that my greatest comfort comes from watching my kids find their own way. Nothing makes me prouder than when someone I really respect says something nice about one of my kids.

I’ve learned that nothing makes me happier than having a special moment with one of my children when it is completely obvious they love and appreciate me.

I’ve learned that I should have no faith in objects, little faith in institutions, faith in people I care about, a lot of faith in myself, and complete faith in God.

I’ve learned that one of my biggest sources of frustration and angst is the guilt associated with unreturned phone calls.

I’ve learned that having money is much more important for mental freedom than I ever imagined. I live scared. That is my motivation.

I’ve learned that intelligence can’t be measured accurately. I think maybe intelligence is like what Supreme Court Justice Potter Stewart said about pornography: “I don’t know how to define it, but I sure know it when I see it.”

I’ve learned that intellect and talent sometimes don’t translate from one field or endeavor to another. As an undergraduate, I had very good grades, but the two courses I did poorly in were economics and an engineering science “calculator” module. At Owen I had a difficult time in Professor Blanton’s computer course and Professor Blackburn’s stats course. Now here I am running a statistics-based, research-oriented quantitative hedge fund utilizing econometric models. In my business we always have to say “past performance may not be indicative of future performance.” I guess there’s a reason for that.

I’ve learned not to compete head-to-head with people smarter than me. I try to compete where my strengths are unique.

My wife has been trying to teach me for 25 years that when people seem odd or mean, they are probably just going through something tough. I am beginning to get this one.

I’ve learned that the world would be a much safer place if we all lived below our means.

Along these lines, I’ve learned not to laugh at old men with no hair on their ankles. I am now one of those old men. This is a pretty minor issue but shows that we should be more understanding and compassionate.

I’ve learned that the world would be a much safer place if we all lived below our means.

I’ve learned that “value” is very difficult to surmise.

I’ve learned that the stock market is a tricky place to make money.

I’ve learned that most people and almost all politicians take the benefits of economic activity for granted. They forget that this is the core of morality and self-worth and opportunity for society.

I’ve learned that most arguments between people could have been avoided with some initial definitions and that all of the Ten Commandments make sense.

I’ve learned that making things as simple as they should be is very difficult. As Einstein said, “Make everything as simple as possible, but not simpler.”

I’ve learned that perseverance is the key to success. Accumulated knowledge and experiences are our most valuable assets. One of my favorite quotes is from Winston Churchill. He said, “When you are going through hell, keep going.” Conversely I’ve learned that if what I’m doing is not working, I better do something else. Separating hindsight from new insight gained from a setback is the key to perseverance.

I’ve learned that answers and new opportunities wondrously appear when I seem to need them.

I’ve learned that I should be striving more for goodness than greatness.

I’ve learned that when something hurts me or angers me, it’s not a good idea to get philosophical and accept it too quickly. And more importantly, it’s even worse to lose control of my emotions and do damage.

I’ve learned that we have no  idea what tomorrow will bring.

While I have no idea what I will learn in the next 25 years, I’m guessing that I will not learn some of the simplest and most basic lessons well enough:

Take care of my family.

Connect to other people.

Be thankful for what I have.

Recognize that my current situation is just a snapshot.