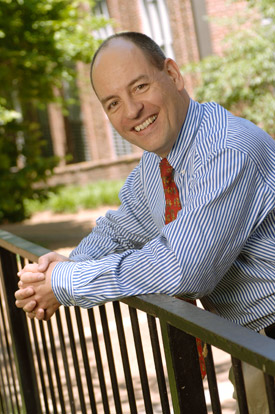 Michael Lapré, an Owen faculty member who studies operations and performance in the airline industry, sees many challenges ahead for the major airlines. Maintaining customer satisfaction will continue to be a problem, he predicts, as fuel costs continue to soar and the industry works to keep costs down.

“Right now the biggest issue is cost,” says Lapré, the E. Bronson Ingram Associate Professor in Operations Management. “They need to figure out an appropriate cost structure that makes it at least appealing to compete with an airline like Southwest. That’s not easy. You want to pay your employees appropriately. But that’s tough because other airlines, the discount airlines, have much cheaper labor. Then there are fuel costs, and figuring out how many different types of planes you can profitably have in the fleet. So there are cost-structure issues, fleet issues, labor issues. It’s not easy.”

Indeed, the airline industry today is facing a triple threat from rising costs, customer dissatisfaction, and an aging air-traffic control system, spurring some industry analysts to compare the current environment to the post-9/11 era of bankruptcy filings and extreme belt-tightening.

While US Airways CEO Doug Parker and others see mergers and acquisitions as an inevitable mechanism for airlines to consolidate costs, it is well known that mergers create problems, at least for the short term, and can create customer dissatisfaction.

“There are going to be more mergers,” Lapré says. “I do know that mergers and acquisitions can be troublesome. For example, the two airlines’ information systems can have trouble communicating. It takes a long time to integrate the information systems. It’s actually much easier to start from scratch than patch different types of systems together.”

Within the next few years, the number of major carriers in the United States will be reduced from the current six—US Airways, Delta, American, Northwest, United and Continental—to four and perhaps fewer, he predicts.

Within the next few years, the number of major carriers in the United States will be reduced from the current six—US Airways, Delta, American, Northwest, United and Continental—to four and perhaps fewer, he predicts.

Lapré, the author of an award-winning paper on performance improvement paths in the U.S. airline industry, focuses his current research on longitudinal data from the industry—data he says is easier to procure than in some other areas of business because the airline industry is so tightly regulated.

“I am focusing on the lessons learned about what worked well,” he explains. “I have found that you really must start with quality first. If you start cutting costs and don’t pay attention to quality, it’s going to be detrimental in the long run.”

“Security issues are going to make flying a bit of a hassle. And now airlines are playing with charging for baggage. The so-called legacy airlines—those formed before the current era of discount carriers—began their operations in an era when oil was much cheaper and costs were less of an issue. Discount carriers, on the other hand, started from a cost-control position, so they can afford not to trim such services.

“Discount carriers are at an advantage because they turn the plane around so quickly on the ground,” he says.

But even discount carriers experience delays due to the antiquated air-traffic control system. “I think the industry is waiting for some technological advances that will make it easier for more planes to be in the air. Right now it’s almost full in the air. It’s too congested.”

Lapré repeatedly returns to the linchpin that will make or break an airline: quality.

“No airline can forget about quality. And that just means doing the basic things right and making sure customers are happy. Satisfied customers can become loyal customers, who will keep coming back.”

Riding Out the Turbulence

Grounded. In airplane parlance, it’s an ironic way to describe someone who oversees the fifth largest airline in the country, but that’s exactly how friends and colleagues of US Airways Chairman and CEO Doug Parker, MBA’86, view him. While he’s adept at managing the 30,000-foot view, they say he remains one of the most down-to-earth people they know—even as his embattled industry confronts soaring costs and plummeting customer satisfaction.

Parker, who steered America West Airlines from bankruptcy to profitability in the ’90s and then engineered a successful merger with US Airways in 2005, launched his career in the airline industry with American Airlines. The Dallas-based company offered him his first post-MBA job during a recruiting visit to the Owen School.

“The fact of the matter is, I don’t think I would have been in this business if it weren’t for Vanderbilt,” he says from his company headquarters in Phoenix. “American Airlines recruited only MBAs, and they did so only at a very select group of schools. Because of the Vanderbilt connection, I was able to get hired.”