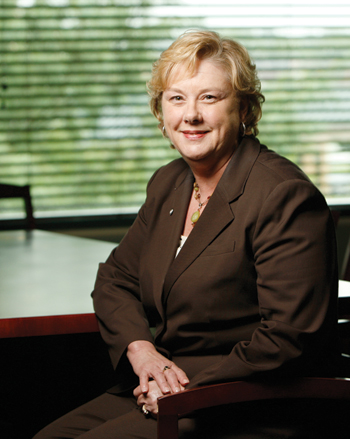 When asked what put her on the career path to her current position as CEO of Citizens First Bank in Bowling Green, Ky., Mary Cohron, EMBA’88, points to two pivotal factors: family and the Owen School.

Cohron’s predilection for banking comes naturally, by way of paternal DNA. Her father spent his life building a successful community bank in Glasgow, Ky., and she has fond memories of learning the business at his knee, from the ground up. But Cohron also credits Owen with shaping her career. “My MBA is the reason I was hired to run Citizens,” she says.

Interestingly, she did not receive a college degree prior to her graduate work at Vanderbilt. Cohron jokes about “the bad old days” when she was denied a scholarship at another university because her husband was already in dental school. Not one to let adversity hold her down, she worked her way up in a local bank and spent a number of years serving on the Bowling Green Board of Education and the Kentucky School Boards Association, as well as the bank board that would later spin off as the group of investors behind Citizens First.

Cohron made the decision to apply to Vanderbilt, having learned that some B-schools admit non-degree candidates. Her then-role as a Corporate Director made her an appealing candidate to the Executive MBA program, and after clearing a number of required high hurdles, she was admitted.

“Without doubt, Owen has enabled me to leverage my gifts and talents to their fullest potential.”